Clearwater Beach is the best-known beach along a stretch of very nice beaches. To the south you will find Sand Key Beach, Belleair Beach, Redington Beach, Indian Rocks Beach, Madeira Beach, St Pete Beach, and a few others. To the north are the natural beaches of Caladesi Island State Park, Honeymoon Island State Park, plus a string of other uninhabited barrier islands. All our beaches are located in Pinellas County, Florida, located midway down the Florida West Coast on a peninsula that creates Tampa Bay. People love to vacation here because of the soft white sands that cover the shores. The area has also grown up as a resort region, supplying endless things to do while on a visit. When people start planning a vacation, however, one of the first questions that comes up is, “Where is it?” We’re going to help out by pinning down exactly where our beaches are. 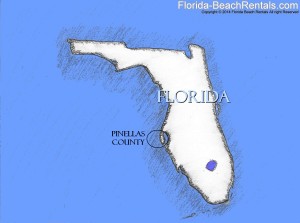 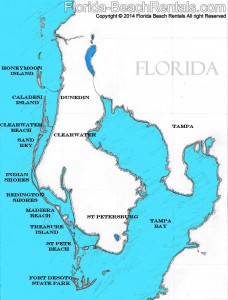 Let’s start by describing our local distances. The road down coast from Clearwater Beach to the most southern beach, called Pass a Grille, is 25 miles. That means you can take a nice beach drive that takes one to two hours if you start at one end and then drive back again. If you want to go the northern most tourist town in our local region, you will head up to Tarpon Springs, a distance of 15 miles from Clearwater Beach. If Tampa shopping malls or theme parks like Busch Gardens, Dinosaur World, or Lowry Park Zoo are your thing, you will need to travel about 32 miles. If you really want to take a local road trip, a drive north to Homosassa Springs Wildlife State Park is 65 miles and a drive south to the Ringling Brothers Museum is 58 miles. 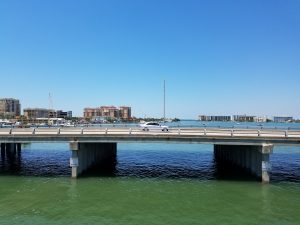 Now let’s take a look at where we sit compared to other locations in Florida. These distances are reasonable and not more than most people are willing to drive; mostly. Car-friendly Daytona Beach is 170 miles away, maritime capital Jacksonville is at 225 miles, the luxurious beaches of Miami are 294 miles, and the laid-back island of Key West is a whopping 433 away. While some of us would love to head down to Key West for a weekend, a longer set of days is needed. 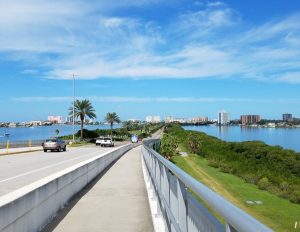 If you are driving in from outside of Florida, here are some of the distances you might travel by road. While these are big drives and most people may not dare the trip, some people still do it. Many are not something you are going to accomplish in a single day- if you plan to sleep.

If those distances are not enough to scare you away, then try out Denver, Colorado at 1880 miles, Los Angeles, California at 2550, and Seattle, Washington at 3115. 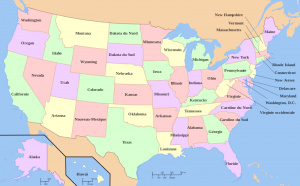 Now we come to our brave neighbors in Canada. Yes, those folks drive here on a regular basis. Here are some of the closest cities in Canada:

Farther than those places and you are probably going to fly. Aren’t you? Here’s some distances we’ve looked up from some of the world’s cities to our beaches, whether you pick St Pete Beach, Clearwater Beach, or one in between. Why did we pick the following locations? Because these folks have all paid us visits!

By the way, you can drive here from Alaska, if you’re so inclined, for a total, one-way mileage of over 5000 miles. Ouch. Sort of puts the 90-mile drive to Disney World into perspective, doesn’t it?

According to the Orlando Sentinel, 112.8 million people visited Florida last year and that 68 million of them were here to go to Disney. VisitFlorida.com has dubbed our state the fishing capital of the world -and if you lived here you’d know why. We are also touted as the birdwatching capital of the U.S. Setting aside wildlife and Mickey Mouse, we also have some of the best beaches in the country and the world.

We love travel at Florida Beach Rentals and we don’t see distance so much an obstacle as we do an adventure. Whatever your plans to arrive here include, we hope you enjoy the trip. 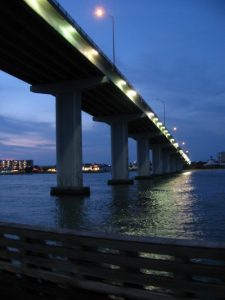 You Waited Too Long to Book your Vacation!