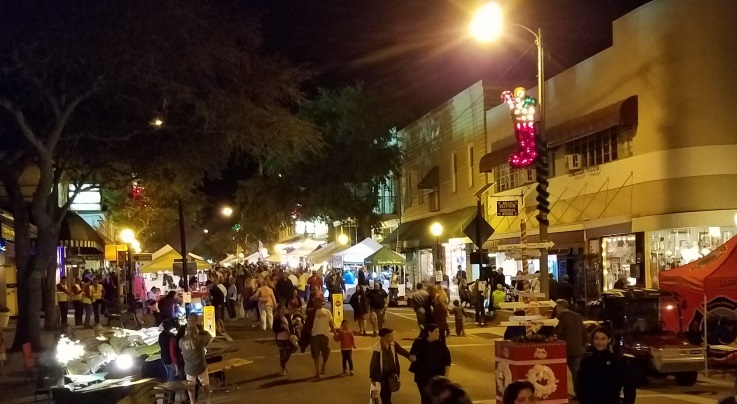 The Central West Coast of Florida is famous for its white sand beaches, sunshine, and a bounty of vacation activities. Unbeknownst to many however, is a whole other activity that we do quite well, and that’s the holiday season. While it might seem unlikely that Florida does the festive season the way it’s meant to be, that’s okay. We don’t do it the way you’d expect, and that’s what makes it so fun.
The coast from Clearwater Beach down to St Pete Beach is actually a great place to spend the holidays. Aside from not freezing in the winter, the local populace has come up with a host of ways to celebrate the season. While snow will never be part of the scene, that doesn’t stop the holiday lights from coming up, and, perhaps to compensate, they’re done with flair.

Holiday Lights in the Garden 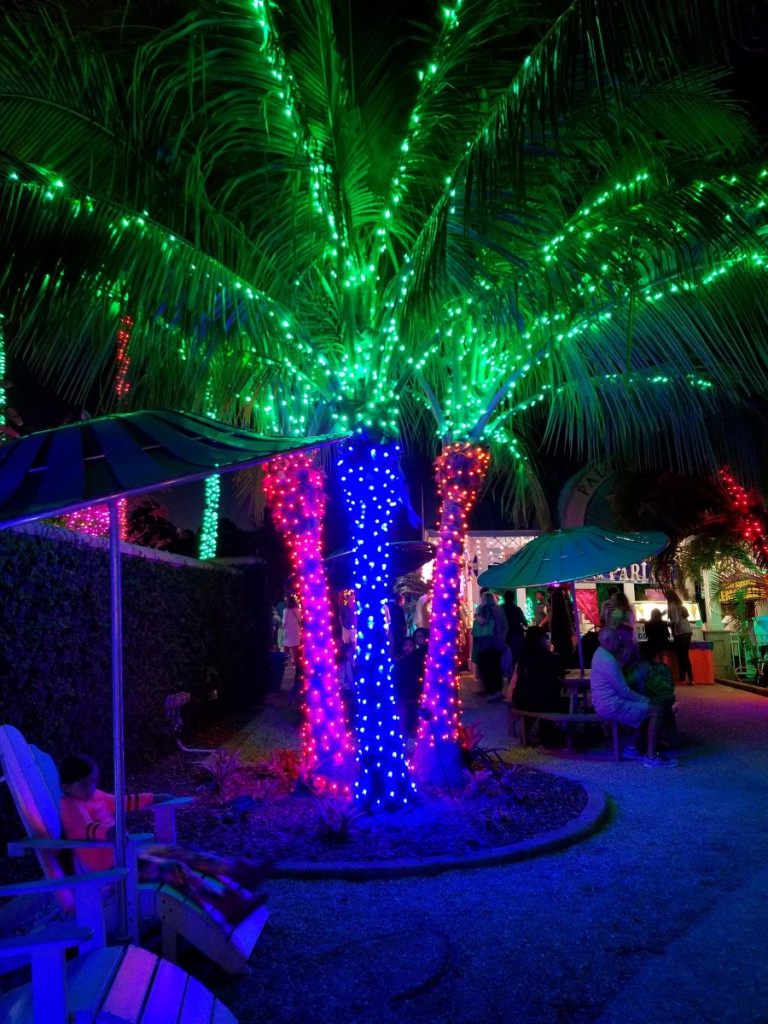 The Thanksgiving to New Year’s span is kicked off at in Largo with the Holiday Lights in the Garden at the Florida Botanical Gardens light show. The gardens are an amazing display on any day of the year but during the holidays nighttime gains an added dose of awe. The exotic trees, plants, and walkways are lighted with what seems to be a million lights. The gardens are extensive and no part has been left out of the light show. Santa and his misses make an appearance for photo opportunities with the kids while the adjacent walled garden has an electric train circling the central Christmas tree. The light display truly deserves he title of must-see. 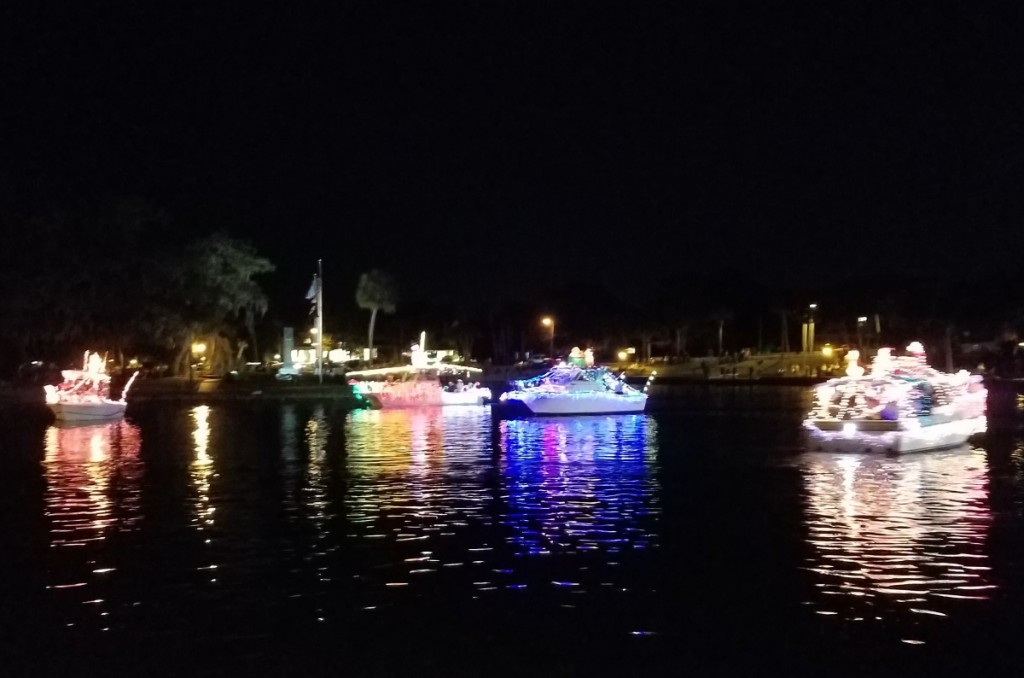 The other holiday season crowd-pleaser is the lighted boat parade lineup. Florida has become famous for them and our coast definitely participates in the phenomenon. This year I attended the Tarpon Springs Lighted Boat Parade. It’s one of the regional favorites because of the accessibility to the waterfront and because of the major street event that goes with it called Snow Place Like Tarpon Springs. The street event pulls in tens of thousands who, if they choose, can stream down the street to Spring Bayou where the boat parade is held.
Spring Bayou has a waterfront sidewalk that winds along the calm waters for a very long way. Spring Bayou derives its name from the spring near its main pier. Most people are not aware it is there, flowing huge volumes of water into the bayou every day. The waterway winds around, giving spectators a choice of where to watch the parade. Banked sides add to the perfect venue, with the attendees using the grassy slopes much like a stadium. 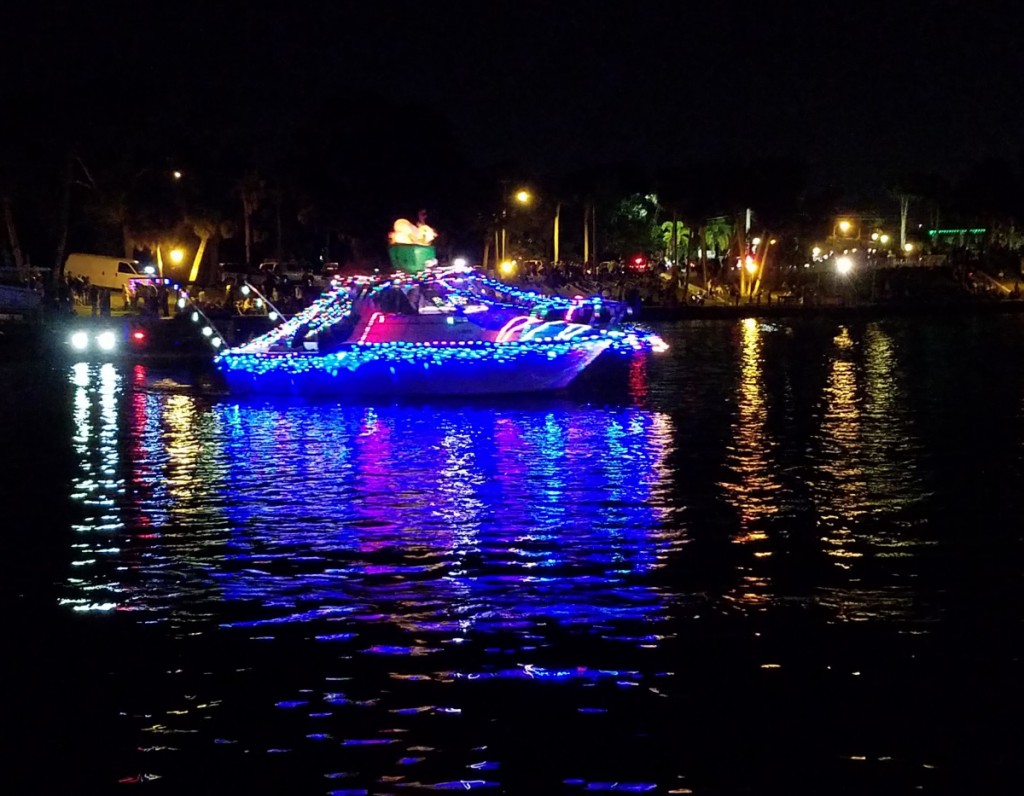 The first sign that the boats are approaching is the music that many of the vessels are playing. With thousands of dazzling lights, they round the bend and ply into the bayou. The event is lively, with people in the boats shouting holiday greetings and the spectators returning the hails. The highlights this year were the rowing team and a brightly lit Sea-Doo that spun in rapid circles. Cheers rose highest while the rowing team circled the bayou, going faster than the most of the boats, although the whirling Sea-Doo gained plenty shouts each time it went into a spin.

I invited some friends, one of which had never attended a boat parade! We had a good time watching the parade and over-stuffing ourselves on food from the Snow Place Like Tarpon street carnival. It made for a memorable night shared by many thousands of local residents and hopefully a good number of visitors to Florida too.

Wonders of Winter on Clearwater Beach