Mangroves trees are a common sight along the coast of Florida, some growing only to the size of bushes while others reach heights of fifty feet or more. But who really cares about mangrove trees? If you knew more about them, you might be more interested. Not only do they create a habitat for a host of animal species but they also protect the shores of Florida from erosion. In fact, they are durable enough to withstand hurricanes, and that makes them important. So keep reading to learn more. The next time you’re in Florida, you’ll know that a gathering of bushes along the coast is actually quite a bit more. 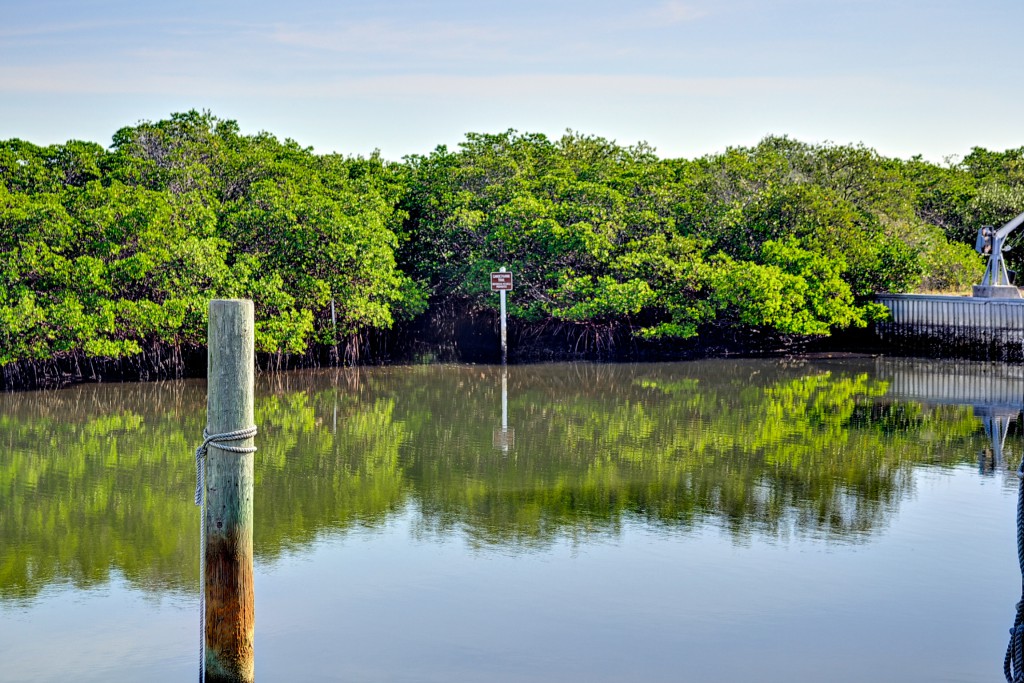 They are easy to recognize thanks to their root systems, which are designed for living in saltwater shallows. The longer you stay in Florida, the more likely you might be to notice that not all mangroves are alike. You will also surely notice that mangroves are perfect places for animals to take refuge. And, while a coastline of mangroves might not be as nice as a beach, the trees play a vital role in protecting the land. 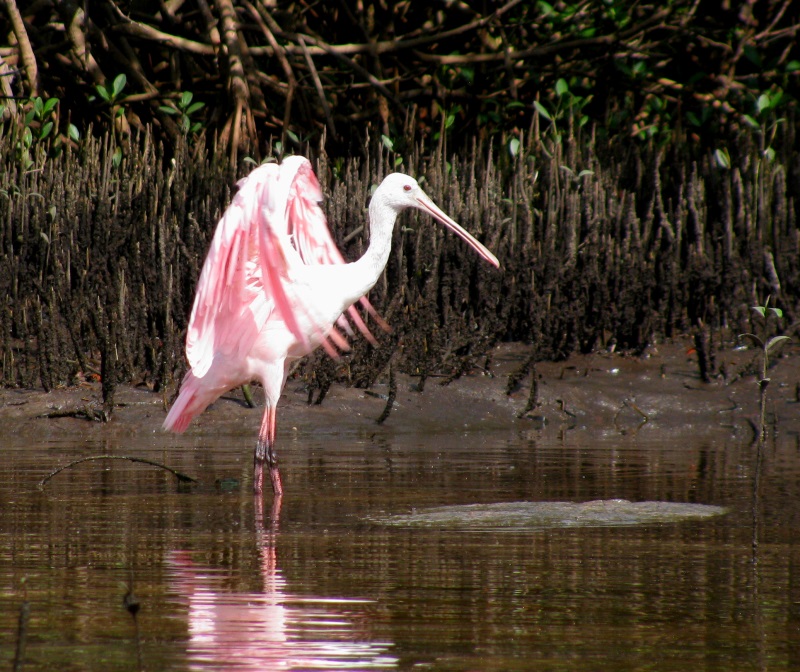 Florida has a number of varieties of mangrove trees but some only exist in the southern half of the state that does not experience freezes. The two varieties that have spread throughout the state are the red mangrove and the black mangrove. While that might not seem important, if you enjoy testing your knowledge in the real world, you can easily identify the two of them on your own. 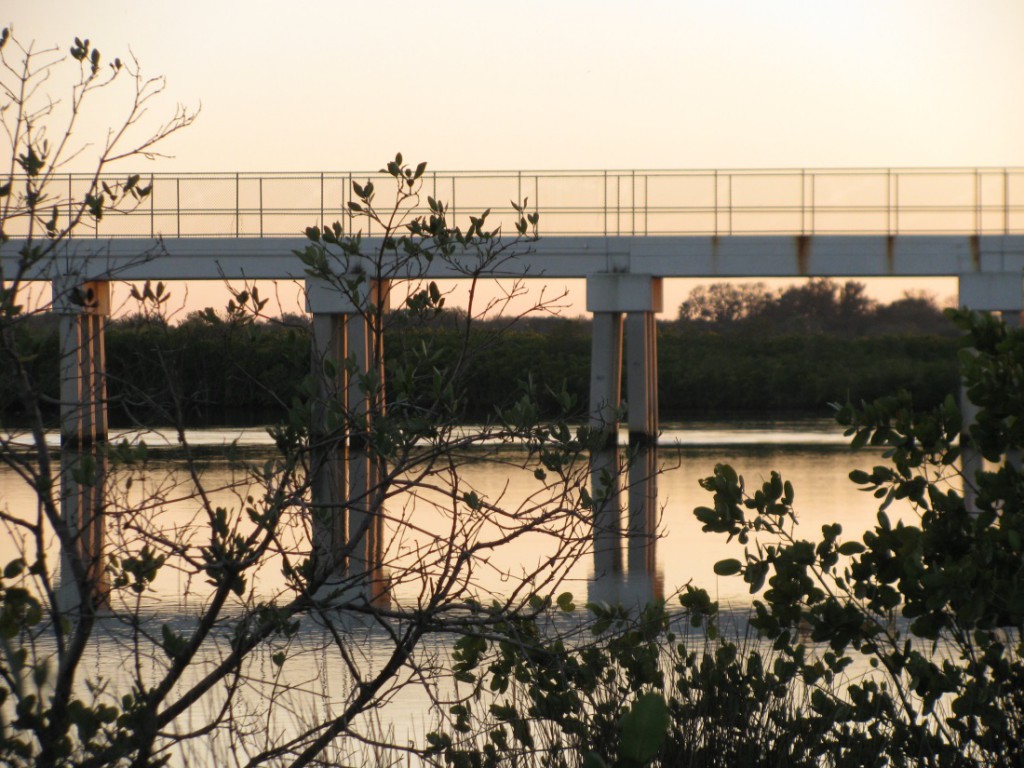 Red mangroves are only red on the inside. You can see the color when you remove the bark. So how will you know one when you see it? That’s easy. They are the ones up on stilt-like roots. Array of a roots in a red mangrove forest is amazing to see. Those roots are also very attractive to animals. Fish and shellfish live underneath of them, birds will hide among them, and crabs love to climb them. There is even a type of snake that can live its life perched on the stalks. If that sounds creepy-crawly, well, okay. That’s hard to argue against. When you consider, however, that you are never going to successfully walk through a red mangrove forest, it puts it back into perspective. The reason they are such good hiding places is because it’s nearly impassable terrain. Larger predators, including alligators, are not going to negotiate the thousands and thousands of closely placed roots. Residents and visitors to Florida can enjoy the red mangrove forests from the outside. Thanks to their design, it is easy to see into the forest. That is best done from a small boat, where the gentle sea breezes can keep you separated from one of the less pleasant denizens of the mangroves, which is the no-see-ems. 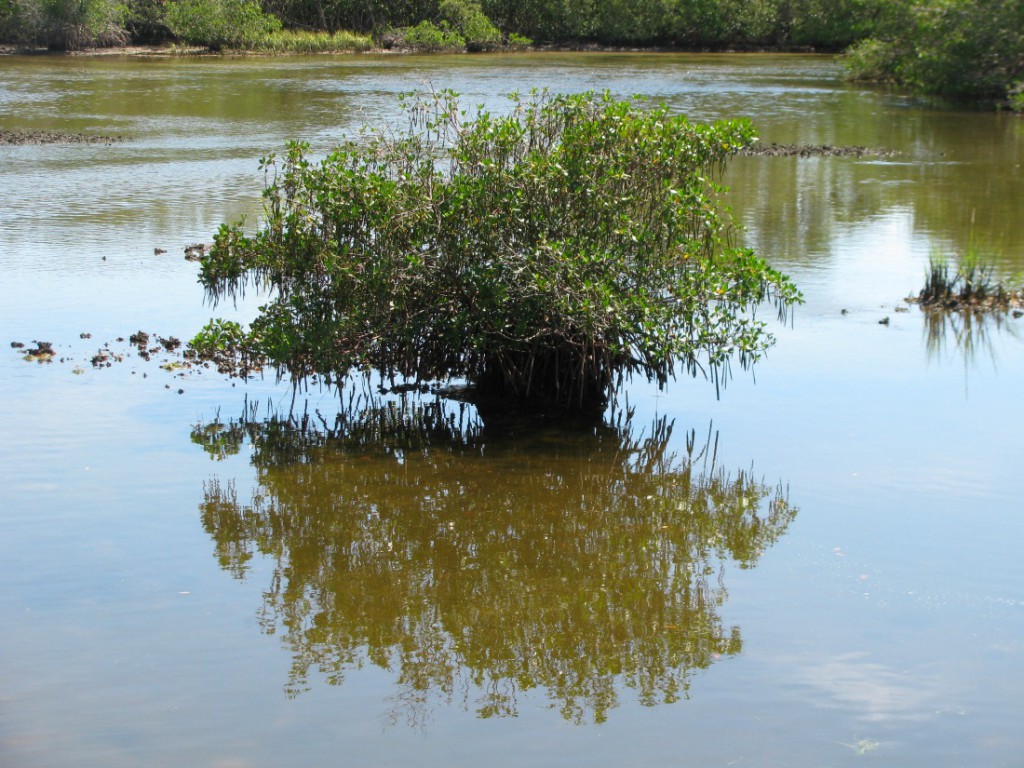 Black mangroves live up on the shores, rather than in the water like the red mangrove. You can identify them by their breather roots. If you ever find yourself by the shore and see a tree or bush surrounded hundreds of straw-sized stalks protruding from the mud, sand, or water, then you are looking at a black mangrove tree. Those actually are breather roots, drawing nitrogen for the unseen root system below. The trees will often sit right at the shore where they experience the ebb and flow of tides. 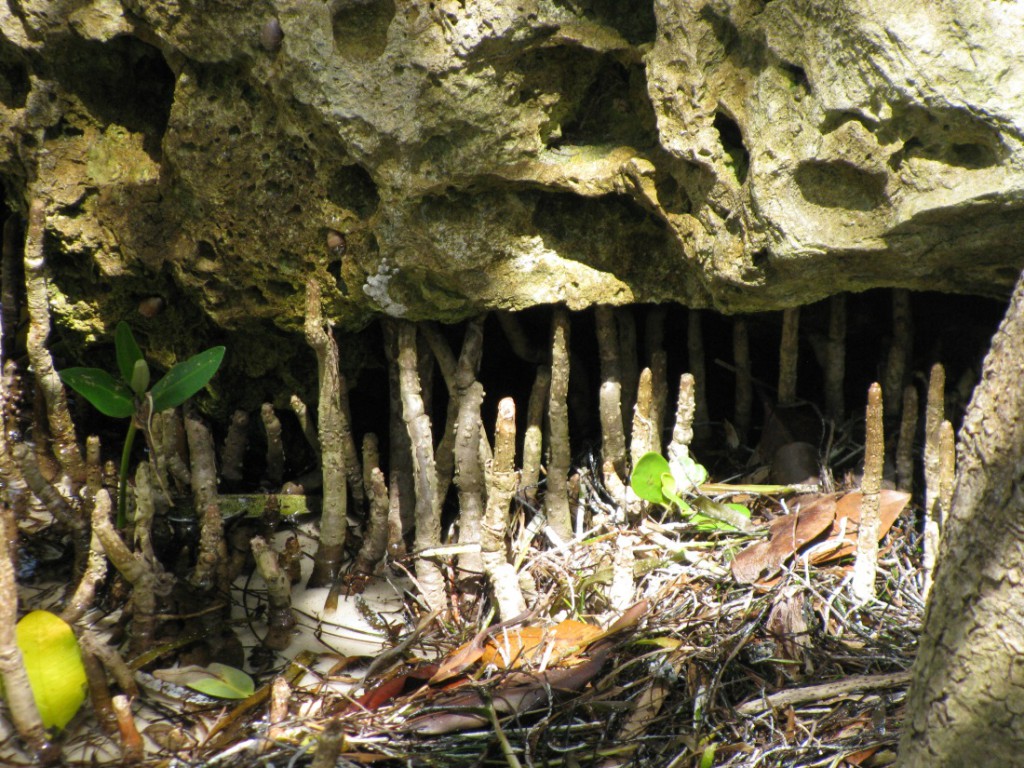 Here in Tampa Bay area, we have warm enough winters to also have the white mangrove growing on our coastlines. It is not as easy to identify as the other two because its roots are all below the ground. On the other hand, it is usually found hanging out with its cousins, the red and black mangroves. They tend to grow taller and, more importantly, they grow on higher ground, preferring to avoid the tidal waters. Florida parks often have boardwalks that pass through mangrove forests. If you see a mound with a tree growing from it, it is probably a white mangrove. Vice versa, if you identify a white mangrove, look down and you will see it is on higher ground. 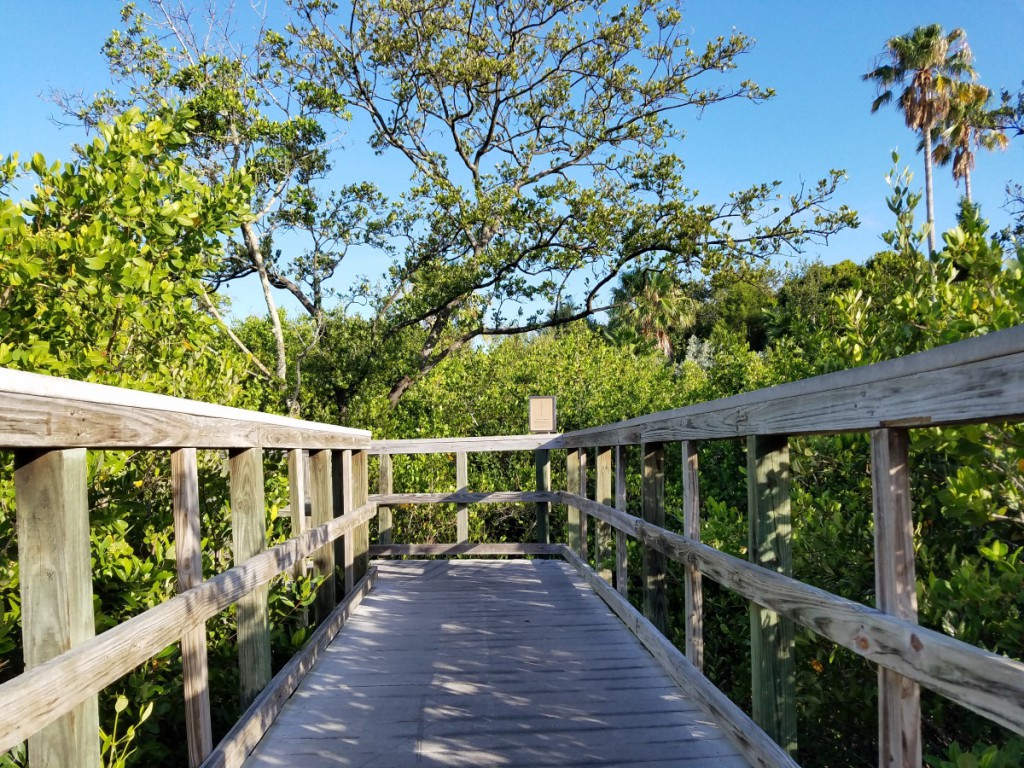 Once you are very familiar with mangrove trees, you will know that their leaves grow differently and have different shades of green. Once you know that, you can actually spot the rise and fall of coastal lands from aerial photographs, which is handy for boating and fishing (and Google Maps enthusiasts). 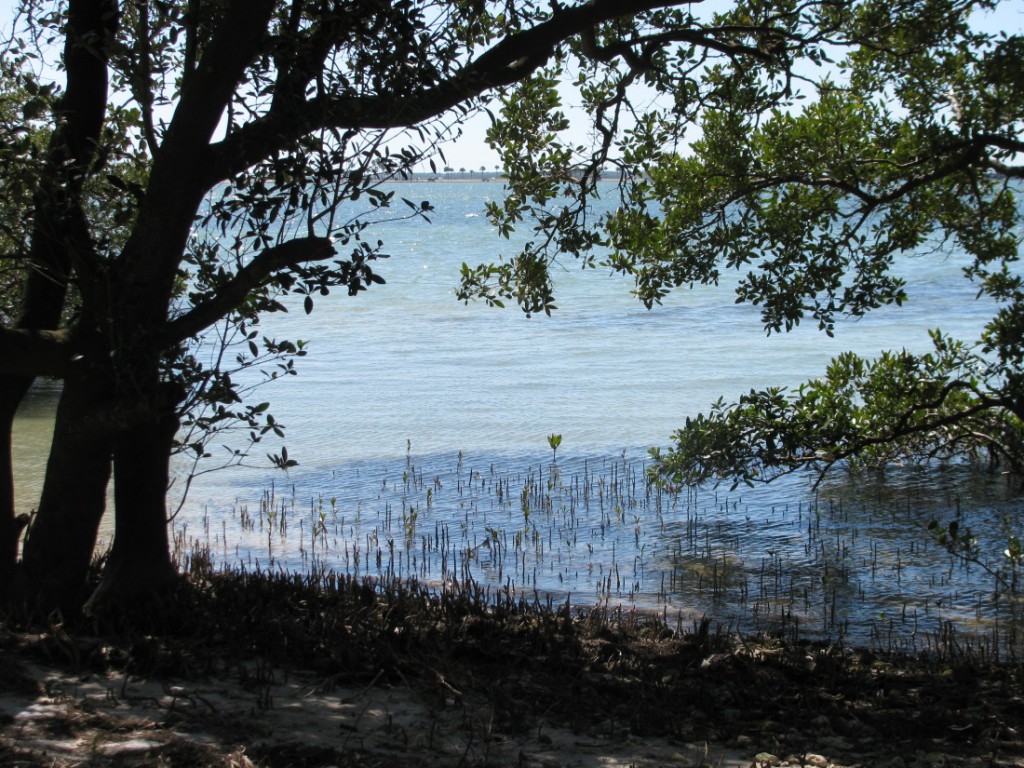 Mangroves are so important for the preservation of coastline that cities have legal codes regulating their pruning. Chopping down all the mangroves on your property so that you have a water view might seem like a nice idea but your waterfront will then be open to erosion and very vulnerable during major storms – and your neighbors as well. 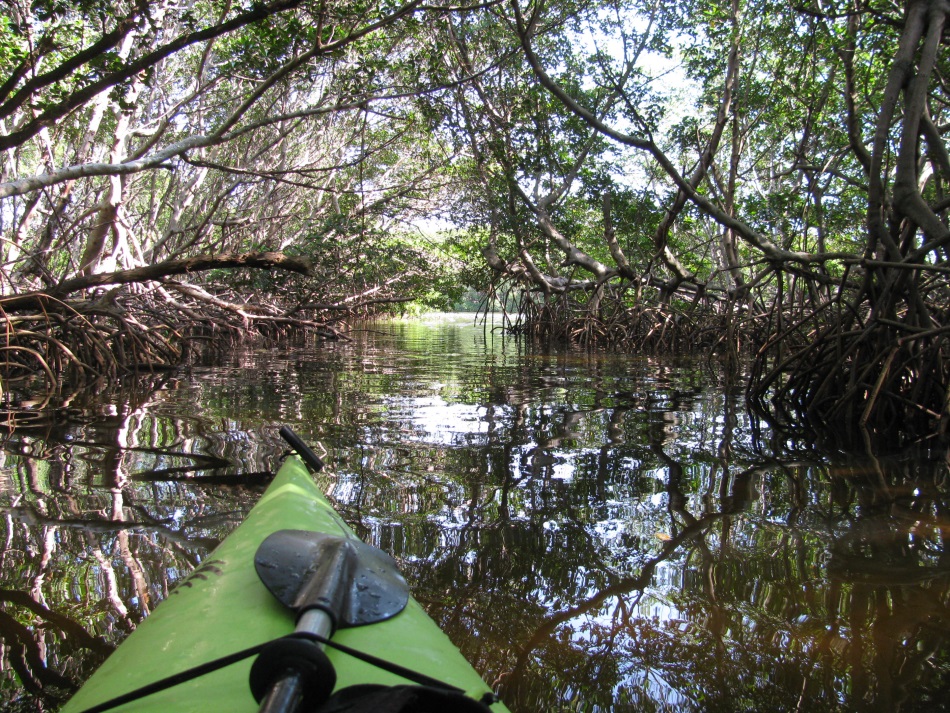 So, the next time you are in Florida and you see a shoreline of bushes and think, “I wish that was a sandy beach,” don’t be so sure. Mangroves play an important role in keeping Florida safe.