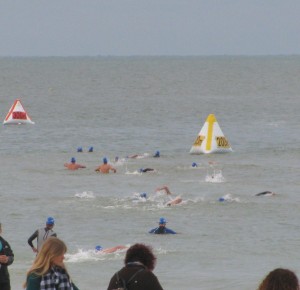 The TriRock Triathlon returned to Clearwater Beach on Nov 9th this year, adding another great event to a beach community whose fame is on the rise. With awards such as best sunset and best beach town, just to name a few, Clearwater Beach is entering a larger spotlight both in the U.S. and abroad. The TriRock Triathlon occurred at the heart of the island, with Pier 60 as its central hub. Vendors and the race finish line were gathered together at Clearwater Beach Park, which is at the foot of the Pier. The roads were partially blocked off to allow bicyclists to pass, with motorist entrance to the beach from the south closed. Spectators turned out to watch the race in good numbers. After set up in the dark hours of the morning, the race started under an early morning overcast on the famous white sands of Clearwater Beach. 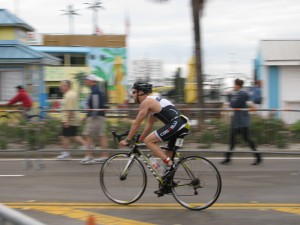 The Gulf of Mexico served for the swimming course, with water temperatures at approximately 70 degrees. The course was marked by bright, inflatable pyramids, with a long line of racers lined up for their turn to start. Spectators were able to get very good views of the swimming portion of the event from Pier 60, which offered over-the-water, elevated views.

Bikes were stationed at the main beach parking lot, right next to the pier, and the main road onto the beach became the bike course. With Clearwater, Florida having very little change in elevation, it might be expected that the bicyclist would have a flat course to ride, but not so, the bridge across Clearwater Harbor providing a man-made challenge.

After circling through the City of Clearwater and Belleair Beach, the cyclist headed back onto Clearwater Beach from the south, returning to the bicycle staging area at the beach parking lot.

The running portion of the event followed a similar course, utilizing the biking and hiking path that runs along the causeway. Runners circled back from the City of Clearwater, returning over the bridge a second time to head for the finish line at Clearwater Beach Park. 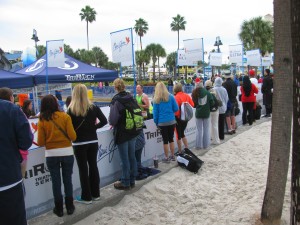 The sands of the beach, the Clearwater Beach Park, and the community businesses had plenty of activity. Clearwater Beach Park was the center of attention, including a live band playing next to the finish line. T shirts and other promotional items were on sale at the park, adding to the reasons to hover near the finish line. Two popular community restaurants near the finish line were the Starbucks inside the Hilton and the Duncan Donuts across the street, helping spectators warm up on a cool November morning (upper 60’s) at the beach. Racers were announced at the finish line with an event held shortly afterward for the winners. Follow this link to find information on race results. With the race adding a lively atmosphere to the beach, it is sure to return again for many more years. Be sure to mark your calendars for November at Clearwater Beach so that you can catch this great event next year.

Walking the Streets of Clearwater Beach