Out of the 7 species of sea turtles on Earth, 4 of them lay their eggs on the Florida coastline.

Kemp’s Ridley is a rare turtle that swims the Gulf of Mexico but nests on the Gulf Coast shores of Mexico. Two other species of sea turtle are the Flatback, which lives in the waters north of Australia, and the Olive Ridley, which ranges in equatorial waters. 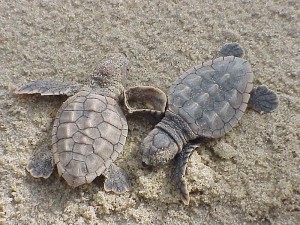 Turtle hatching season on the Florida Gulf Coast lasts from May through October. On the east coast of Florida, the season starts as early as March. While four species nest in Florida, only loggerhead turtles nest commonly on the Gulf Coast. According to the Florida Fish and Wildlife Conservation Commission, turtles create 3-8 nests per kilometer on the shores of Pinellas County, where you will find Clearwater Beach and other popular destinations like St Pete Beach, Treasure Island Beach, Madeira Beach and Indian Shores. While Pinellas County is not the most prolific site for turtle nests, you should still keep an eye out for them while you are here.

Turtle Egg Laying on the Beach 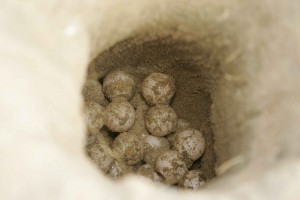 Sea turtles do not return to land once hatched. Only the females will pull themselves ashore to lay eggs. The life cycle of sea turtles keeps the young ones in shallows or in areas with growth where they can take cover. When larger they move to the shallows, and then later, into open water. Loggerheads live approximately 50 years but do not begin mating until they are around 35 years old. Females will mate every two to three years, laying an average of four nests. Florida has groups that help to protect the sea turtles, volunteers locating nests and marking them off so that beach-goers to not dig or set up umbrellas or towels on top of the nests. When walking the beach, be on the lookout for stakes bearing orange or pink tape. Disturbing the nests is illegal. Many nests have cameras trained on them to deter anyone from vandalizing them. 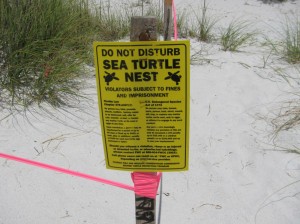 You can play your part in protecting the sea turtles. Always leave the nests sites alone. If you believe you have found an unmarked sea turtle nest, be sure to contact authorities so that the nest can be protected. Clearwater Marine Aquarium, home to Winter the dolphin from the Dolphin Tale movies, will take your calls if you find a nest in Pinellas County, (727-441-1790). Other than human tampering and predation by animals, lights are the biggest threat to sea turtle hatchlings. Hatched sea turtles aim toward the greatest light, which, without beach housing, would be the moon reflecting off the sea. That is why many locations mandate that beach houses and businesses keep their shades drawn during turtle hatching season. You should not shine flashlights or other types of lights onto hatching sea turtles. 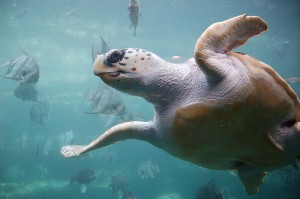 Additionally, if you come upon an adult sea turtle coming ashore to lay eggs, keep your distance. If the turtle is frightened, it may return to the sea, in which case, it could drop its eggs into the open water where they will not survive. Hunting and loss of habitat has greatly reduced the sea turtle population. If you are given the opportunity, do your best to help them survive. 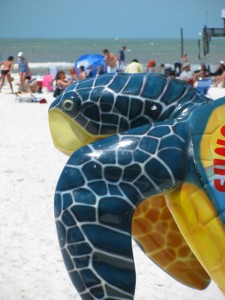 Here in Pinellas County, home to Clearwater Beach, we love our turtles.