You will find Honeymoon Island State Park on the Central Gulf Coast of Florida. It is just north of Clearwater Beach and Caladesi Island, both of which are popular tourist destinations. Honeymoon Island is reachable by car thanks to the Dunedin Causeway, which is a popular weekend destination for boaters, fishermen, and those who enjoy a more casual beach experience. The park has a manned entrance gate with a required entry fee of 4-8 dollars depending on the number of people in your car.

Any trip to the Honeymoon Island State Park nature trail should begin at the nature center. While the nature center is not at the trailhead, it will give you an idea of what you might find on the island. The rangers are always willing to help, and will answer any questions you have. You will find books on the area, dioramas of island wildlife, kid-friendly displays they are allowed to touch, interactive videos, and a display on the island’s history. Outside is an observation deck that overlooks the shallows of St Joseph Sound where you can often observe Honeymoon Island ospreys diving for fish. 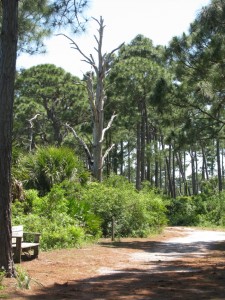 The Honeymoon Island nature trail is a 2.5 mile loop, which runs the length of the island’s pine forest. Honeymoon Island has two peninsulas that reach northward. The western arm is mostly beach, while the eastern stretch is forested, with shores covered by mangrove trees. The stretch of water between the two peninsulas is called Pelican Cove. The looping nature trail, which is on the eastern arm of the island, has a number of connectors, allowing hikers to shorten their hike by making smaller loops. Although you will walk through a forested area, the trail will also have lots of sun, so be sure to bring your hat and perhaps some sunscreen. The surface of the trail is sand, sometimes covered with grass or pine needles, but sometimes not. Be sure to use footwear that goes well with soft, sandy terrain. Keep an eye out for the small signs along the nature trail that give you information on island features.

The most prominent plants you will find on the Honeymoon Island nature trail are the tall slash pines. You will also see them as the barren dead trees where the ospreys like to build their nests. The other common trees are palms and mangroves, a staple plants for the Florida Gulf Coast. In the past, the island appeared somewhat dry, with stretches of low foliage where you could see hikers on the other side of the loop trail. After the island received a prescribed burn a few years ago, the plants filled in the spaces that were previously empty.

Now a host of the new slash pines are growing, which is one of the main purposes behind prescribed burns. In addition to the trees you will see a seemingly endless variety of other plants, many of them with flowers. During the spring you will also see the prickly pear cacti in bloom. 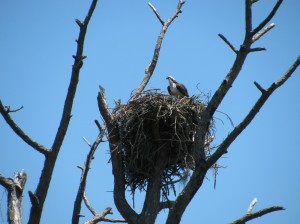 The most popular feature on the Honeymoon Island Nature Trail are the ospreys. These fishing hawks are expert at catching their meals out on the Gulf of Mexico, in St Joseph Sound, and in Honeymoon Island’s Pelican Cove. You will often see them flying back to their enormous nests with fish in their claws. The grand nests are easy to see because the ospreys most often build them in dead trees. Joining the ospreys on Honeymoon Island are breeding pairs of bald eagles and great horned owls. These latter two, however, are not as easy to spot as the abundant ospreys.

In addition to many types of birds on the island, you will also come across the gopher tortoise, an island inhabitant that is also popular with visitors. Some of the tortoises will make hasty retreats into the island brush while others will calmly watch you walk by. The tortoises and the birds mentioned above are not the only natural inhabitants, so keep your eyes peeled and you will surely discover more wildlife along the Honeymoon Island nature trail. 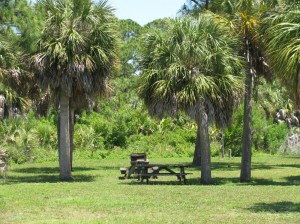 At the head of the Honeymoon Island nature trail you will find a number of helpful amenities. A small park sits next to a parking lot that never seems to fill up, which is very handy. The small park contains picnic pavilions and a fairly large playground for the kids. You will find a restroom across from the parking lot which also happens to be next to the western trail head of the looping nature trail. If you turn right on path behind the restroom, you will be heading onto the nature trail. If you take the path to the left, it will take you to the famous Honeymoon Island beach. As for that beach, we will let you know more about the other fantastic features of Honeymoon Island State Park in upcoming blogs.

[…] The Gopher Tortoise can be seen here in open flat lands like Honeymoon Island State Park. […]