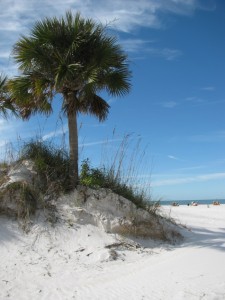 While walking the beaches in Florida, you might take a moment to reflect on how the beaches came to be. Underneath the beautiful soft sands is a marine legacy that reaches back millions of years.

Florida has spent much of its long life below sea level. Millions of years ago, North America and South America had not yet connected and the Gulf of Mexico did not yet exist in its present form. Florida was merely sea floor, part of the continental shelf of North America.

Florida Rising out of the Sea 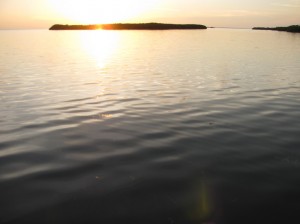 Sea animals lived and died over millions of years, depositing their skeletons and shells on the sea floor. That happened in such volume that the marine animal remains became a sediment that eventually formed into limestone. The limestone build up became the foundation for more sediment, bringing Florida closer to the surface. The sea level fluctuated with the coming and going of the ice ages. Each time Florida rose above the water, only to be covered by the seas once again.

When the land was above sea level, vegetation and land animals moved into Florida. The animal life of early Florida included elephants, sloths, saber-tooth tigers, and giant beavers. When North America and South America joined together, the Gulf of Mexico was born.

Florida subsequently rose and fell beneath the waves until, finally, portions of it remained above sea level permanently. The Florida we recognize formed at the end of the last ice age when sea levels matched those we know in present time.

The powdery white sands of Clearwater Beach are part of the legacy of Florida. With the talk of sea beds and millions of sea creatures creating a limestone bedrock, it might seem logical to assume that the seashore was created from fragmented shells. In fact, the soft, white sands of Clearwater Beach came from the Appalachian Mountains. Clearwater Beach sands are made of quarts rather than sea shells. This light colored rock is responsible for the brilliant color of Gulf Coast sands. In ages past, rivers that are now long gone, carried the eroded stone of the Appalachian Mountains southward. 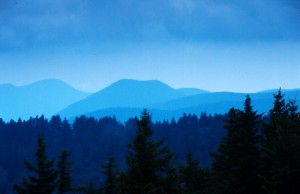 Geologists have said that the mountain range was once as tall and jagged as the Rocky Mountains. The Appalachians are actually a much older mountain chain, eroded, over the millennia, into rolling peaks at lower elevations. All that rock traveled southward, ground eventually into tiny grains. Those beautiful bits of stone now form the sands of Clearwater Beach and the Florida Gulf Coast on which we walk today.

The Best Beaches in America