Is the Clearwater Color Run a Race or a Party? 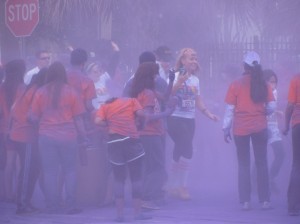 Attendees to the Clearwater Color Run in January of 2014 were in for more than just a race. Long before the race began Coachman Park filled with racers in white shirts and their camera-toting companions. Tents dotted the field, selling T-shirts, drinks, and unique photo opportunities. An instructor on the Coachman Park stage led a large number of participants in a Zumba dance warm up. Once at the starting line, an MC standing on top of a tower next to the gates kept the crowd lively by throwing give-away items into the throng of runners. The atmosphere of the Clearwater Color run seemed more like a party than a race before the starting gun ever fired.

Clearwater Color Run Is Not Your Ordinary 5K 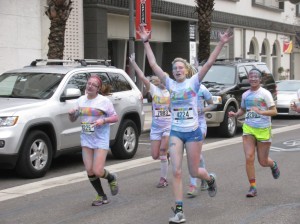 The Clearwater Color Run was a lot like other 5K races with one distinct difference; the racers get pelted with colored paint dust along the way. Standing at the first station we saw the racers doused with purple. The cloud plume was so thick we could barely see the people inside. Coming out the other side, the color-stained runners were smiling and laughing. When we moved to the 4.5 kilometer mark, the smiles were fewer, but the spirits of the runners were still high. Many of the participants gave us cheers as they ran by, headed down the last slope toward the finish line. By this time they had gone through all four color tossing stations and were completely covered with bright dust.

The Clearwater Color Run After Party

While there was no official after party for the Clearwater Color Run, the festivities at the finish line did just as well. The organizers held a contestant dance off on the stage while music blared and bubbles from large machines filled the air. At regular intervals the guys on stage called for a color toss, in which all those gathered nearby threw colored paint dust into the air. It was a great event for all ages, with lots of teens and kids of younger ages participating. The Clearwater Color Run was promoted as the happiest 5K on the planet, which it seemed to do a pretty good job of delivering.