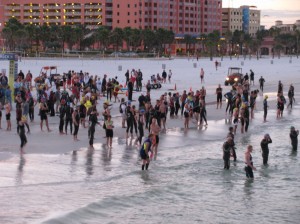 The TriRock Triathlon hit Clearwater Beach last week on Sunday November 10th. The normal routes north and south on Clearwater Beach were closed down and the streets filled with participants and spectators. The racers gathered in the dark hours of the morning with a good showing of spectators braving the early hours to get a view of the race. The spectators gathered on Pier 60, overlooking the swimming course, while the racers and their supporters formed a large crowd on the beach below. The sunrise was beautiful and, not long after, the starting gun sounded. 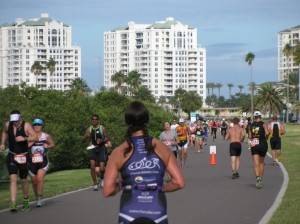 The Gulf of Mexico was the scene for the swimming course, with large, orange course markers easy to see in the rising sun. The swimmers emerged to cheers and headed for the transition area. The bike route headed over the Clearwater Beach causeway and through the city of Clearwater, Florida. Bikers headed south to the next beach bridge at Belleair Beach where they headed back north again. The running portion of the race took the racers around South Beach of Clearwater Beach and back onto the causeway. The finish line waited for the racers on the lawn in front of Pier 60, where a female announcer in a tutu peeled off quips for the arriving racers. 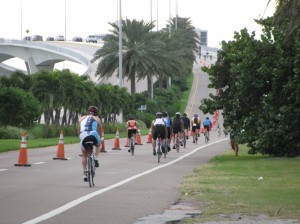 Fantastic weather graced the racers of the Clearwater Beach TriRock event. The weather was mild and fairly dry, providing some of the best exercise weather of the year for the hard working participants. Aside from the beautiful Gulf Shores of Clearwater Beach, the racers were treated to well-maintained Pier 60 area, Beach Walk and the beautiful beach causeway. The bicycle route looping south to the Belleaire Causeway was easy on the eyes as well. Spectator opportunities were endless, with the race course wide open and accessible. The Pier 60 staging area, with its MulitSport Expo, had plenty of space for both racers and spectators to gather at the end of the race. 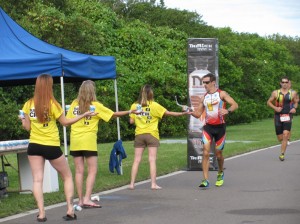 The Clearwater Beach TriRock triathlon had three divisions; Intermediate, Sprint, and Relay. You can see the winners for the Sprint here, the Intermediate race winners here, and the Relay team winners here.