A long time ago, in a land right under your feet, a river ran to the sea. As the eons passed, the shoreline moved and the seas rose and fell. Today at the mouth of that ancient river-that-no-longer-runs is an island known as Egmont Key. Formed by the ancient lay of land, it differs from the nearby barrier islands, which were created wind, waves, and shifting sand. Located on the beautiful waters of the Gulf of Mexico, this fascinating Florida island sits at the mouth of Tampa Bay. Egmont Key State Park is remote and well worth the effort of visiting.

November marks the days for visiting the island, not because of the season, but rather the Discover the Island event which is organized by the Egmont Key Alliance,. While Egmont Key is open all year long, the event invites guests to the island for tours, food, displays, and souvenirs which are not ordinarily present. By doing so, the Egmont Key Alliance increases awareness and support for preserving the important island and its unique history. 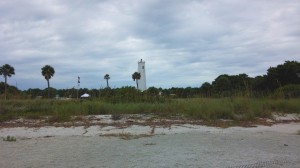 Egmont Key has served many purposes over the years, but its strategic position at the mouth of Tampa Bay dictated its destiny for military use. A fort sat on the island as well as guns for defending the mouth of the bay. While modern technology has overcome the need for a station on the island, it was used from the Civil War through World War Two to defend the important harbor. Tour guides for the event explained the various unique ways those stationed on the island kept the mouth of Tampa Bay safe. Many of the concrete structures still stand. Others have sunk beneath the surface of the Gulf of Mexico and sit off shore beneath the waves, victims of a shifting shoreline.

In the present, the island supports a lighthouse, several old bunkers, and the brick streets of a bygone military base that you can walk. Amid the reminders of days gone by are railroad tracks that ran from the base out to a pier for loading boats. Palm trees and mangroves cover the island, the brick streets running through a palm forest now, rather than a base. On the west side of the former buildings is the beach, a beautiful stretch of white sand paradise. You will rarely find this beach occupied, except, of course, for the Discover the Island days.

The southern portion of the island is off limits to visitors, being the domain of nesting birds and sea turtles. The large preserve is home to an amazing number of birds during nesting seasons, although our guide explained that November was not a peak month. Despite most of the island being a preserve, the portion that is open for touring is quite large and more than enough to fill an entire day of exploring. 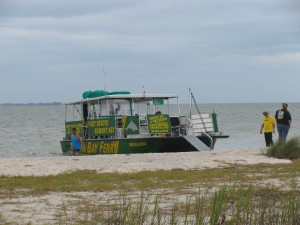 Mark your calendars for November to take advantage of this fun and informative event. While you can visit the island any time you like, the Discover the Island event might be the best time to learn about the island’s history. It is also a good time to go if you don’t particularly want to be on an island all by yourself. Despite what type of experience you enjoy, guided or solo, be sure to check out this island. A ferry runs to it regularly from Fort Desoto Park. Don’t miss out on this unique experience!