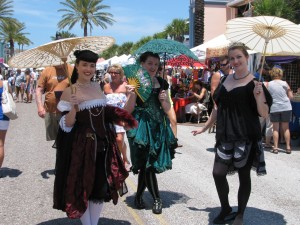 Pirate days returned to John’s Pass in Madeira Beach, Florida May 8th through the 10th. The pirate festival has become a well-known excuse to visit the already popular tourist destination of John’s Pass Village and Boardwalk. The site is a well-known favorite for locals and visitors alike, due to its fun shops and great restaurants. The tourist-style shops sell nautical knickknacks, T-shirts, mugs, and lots of other touristy items. The restaurants are fantastic, some of them having dining docks on the waterfront. The ice cream and taffy shops add the finishing touch. The boardwalk and village are the perfect size for strolling, big enough to keep visitors looking but small enough so that you can see it all. 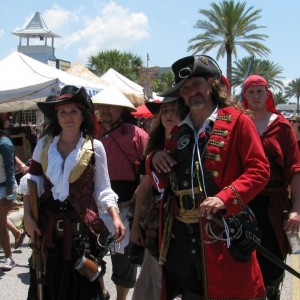 John Levique Pirate Days added a special buzz to the shopping and dining village at John’s Pass. Merchant tents lined the streets while the main parking lot had been converted into a tent with a stage for bands. A second performers’ tent stood at the other end of the street, with a fighting ring for pirate disputes and tents for visiting pirates. The streets were filled with visitors shopping, eating or just sightseeing. At every turn more pirates showed up, walking the streets in every directions, grizzly pirates, lady pirates, lone pirates, or packs of pirates. A lot of pirate paraphernalia was for sale in the merchant tents, for anyone wanting to join the fray.

The pirate invasion of John’s Pass happened at noon. The battle, as it turned out, was between the pirate tour boat that docks at John’s Pass and the Hubbard’s Dolphin Tour boat. The two large vessels spun around the waters of the pass at surprising speed, shooting water cannons at one another. Added to the mix were cannon blasts that echoed off the shops of the boardwalk. Smaller boats weaved into the battle, armed with their own water cannons, taking any opportunity to strike at the “invading” pirate ship.

On the shore, more pirates fired cannons, ones much larger than those on the ships. The pass reverberated, literally, with the booming of cannon fire. 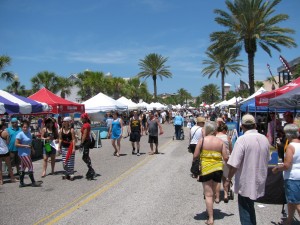 After the pirate show, it was time to return to the shops, the vendor tents, the shows, and a chance to dine on the waterfront. Despite the all the activity, the parking was reasonably priced and easy to find. Thanks to the small size of John’s Pass Village and Boardwalk, it was not difficult to find the car again. The event was a lot of fun, which it always is. Visitors to this yearly festival are advised to check the online schedule. It will help guide you toward the times when bands are playing, when the pirate invasions and battles occur, and promotional specials offered by bars of John’s Pass. If you are living in the area, or you plan to visit in May, be sure to check this event out in the coming years. John Levique Pirate Days really is one of the best events of the year.