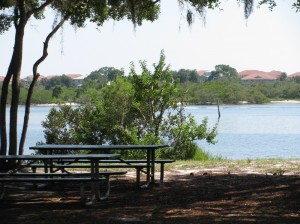 When Private Island Charters extended an invitation to tour the barrier islands of the coast, the offer was impossible to refuse. The tour started at Anclote River Park, a well-known destination for Tarpon Springs locals. While the park is not so much a destination for tourists, it does have many positive draws. Aside from the boat ramp, it has picnic pavilions with lots of shade of trees around, a swimming beach, and a Native American mound site. We set off from the boat dock at the park and headed out the boaters’ channel at the mouth of the river. 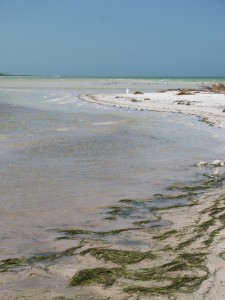 Our first destination was the island that most locals call North Sand Bar. It is part of a long sandbar that has risen above the water. It now supports mangrove trees, bushes and grass, despite being very small. The sands are perfectly soft, and bright. A few people were strolling the island while a number of private fishermen worked the shallows around the island. It is a beautiful place, which is most often a peaceful place to enjoy near solitude on remarkable beaches. We took a tour of the island on foot after dropping anchor. With such an abundance of shallows, it is a great place for wading.  After circling the island on foot, which took only minutes, we waded out into the shallows of the sand bar. Then, with more to see ahead of us, we climbed back onto the boat and headed off for more island exploring. 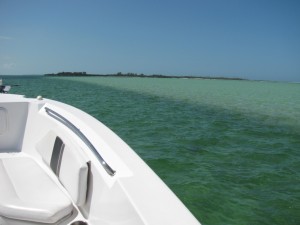 North Sandbar nearly connects to Anclote Key to the south but is cut off by a strong current that flows between. Anclote Key is a three mile long island that is uninhabited. It is well established, with forests and grasses along its length. Visitors to the island can almost always enjoy solitude on its beaches. The island also has a lighthouse from the 1800s. While visitors can no longer climb the tower, it is nice for photographs as well as being an important part of local history. We cruised by the northern end of the island using the channel between the island and the sandbar. Because the day was slightly windy, we did not stop the Private Islands Charter boat on Anclote Key, due to the higher surf rolling onto its western side, which is where the beaches are. 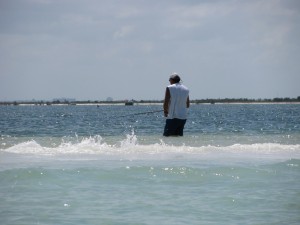 The next island to the south is called Three Rooker Bar. Maps vary on its name, refering to it as both an island and a sandbar. The sands of Three Rooker Bar are still moving about, with a channel currently cutting the island in half. According to locals, the island was split in half in the past but then reformed. A recent storm split the island again, and a strong current now passes between the two halves of Three Rooker Bar. We stopped on the southern half, pacing around its shores for a  while. The shelling next to the tidal current was fantastic. The flow of water between the island halves was as strong as any river, creating surf where it issued into the waters on the west side of the island. While we wanted to circle the island on foot, the southern end was roped off for the nesting birds. The trees on the southern end of the island were inviting, but we left them to the birds and their nests and returned the way we came. The return trip to the docks was a sun-filled ride across the open waters of the Gulf of Mexico. 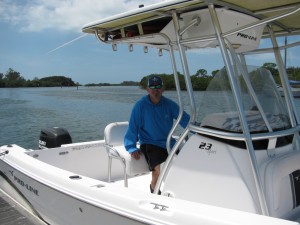 The charter was a lot of fun, with Captain Todd going wherever requested. He explained that most excursions include dolphin sightings. The sites within reach are numerous, with even more locations either north or south of the places we visited. Honeymoon Island State Park is within reach, as is Howard Park, the Anclote River, and the northern Nature Coast. Captain Todd said that, while he has taken fishermen out, most his charters are booked by vacationers who want to see the area. The region of the Gulf of Mexico his boat plies is remarkable, with pristine natural islands, state parks, an historic river, and more. The choice is yours. You can ask to go where you like, or you can sit back and let Private Island Charters treat you to the treasures of the coast.

Wildest Islands on the Central Gulf Coast of Florida

If you would like to stay at a waterfront vacation rental with a private dock serviced directly by Private Island Charters call us at Florida Beach Rentals and we will do our best to accommodate you. (727-288-2020)