Discover the Island at Egmont Key 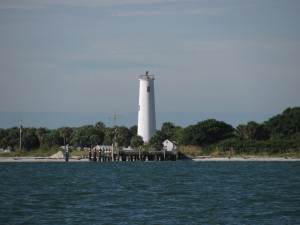 The Discover the Island event hit Egmont Key last month, giving area residents and visitors a great reason to learn more about the unique island. The island is located at the mouth of Tampa Bay, north of the main shipping channel. Egmont Key Alliance put on the event, adding plenty of fun additions to an already fascinating destination. The event was held November 8th and 9th (2014) with plenty of promotion to let us all know to show up. Attending the event was a rewarding experience, even for those who had visited previously. Visitors were allowed to explore the island at will, with lots of goodies thrown in, such as historical re-enactors, a kids area with games and crafts, a silent auction to help support island preservation efforts, and, of course, a food tent. With the fascinating terrain, wildlife, ruins, and rich history, the Discover the Island event at Egmont Key was a crowd pleaser.

Visitors were free to discover the ruins of Egmont Key’s military bunkers, which date back well over a hundred years. Only the concrete and some metal remains, leaving the buildings without doors, and open to tour. The decaying buildings are the ruins of Fort Dade, part of a defense structure for Tampa Bay that includes nearby Fort DeSoto. The building began in the 1800’s for the Spanish-American War. The island saw military use up through the Second World War, when it served as an observation and targeting station against enemy ships who might try to enter Tampa Bay. Today on the island, tourists can view the ruins up close.

Many of Egmont Keys buildings have sunk into the Gulf of Mexico, due to erosion of the island’s west coast. Other ruins are open to enter, including bunkers, housing, and a guard house. Targeting towers stand amid the brush of the island while a network of brick roads lead through a military compound partly reclaimed by forest. Although the event provided an excellent excuse to tour the ruins, Egmont Key is open year round.

A lighthouse still stands on Egmont Key, providing a light, into the present day, to direct ships and other vessels that navigate near the island. The lighthouse, erected in 1858, is the second to exist on the island, the first lasting only a short period before being too damaged by weather for safety. The existing lighthouse has unusually thick walls, the inside being no more than a spiraling metal stairway. For the sake of preservation, visitors are not allowed to climb the tower. For the Discover the Island event, a historical re-enactor waited at the tower bottom to share his knowledge of the lighthouse, as well as the island itself.

No question could stump him, his information on the site satisfying every query. The lighthouse is the best known building on the island, serving as a symbol for Egmont Key.

For the Discover the Island Event, guided tours were available to walk guests by the most important sites. The guides, versed in the islands military and natural history, walked large groups around the island, describing the role of each building visited. They shared such details as storage containers for mine field parts, underground houses, the methods for targeting enemy ships, Fort Dade operations, an island railway, and more. They also stopped the tour groups at a presentation regarding the wildlife inhabitants of the island. Guides told of the gopher tortoise, an endangered species which lives on the island, digging boroughs into the soft sand.

Sea turtles nest on the island, and the entire southern end is occupied by the Egmont Key Wildlife Refuge, which is a nesting site for numerous species of birds. Another station provided an up close look at military memorabilia. The tours provided great information, the history portions delivered in the environment where the history occurred. 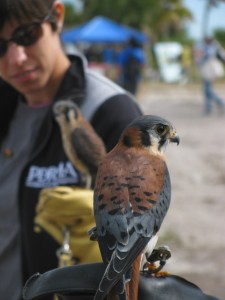 A number of other great goodies were in store for visitors who attended the Discover the Island event. Civil war re-enactors set up camp on the island, performing military drills for the crowds that gathered. The drills were well done, with historical commentary from the commanding officer. The order to fire was silent, however, out of respect for a wildlife attraction at Egmont Key for the day. Boyd Hill Nature Preserve  brought a collection of live raptors. Owls, hawks, and falcons were out in the open for visitors to view while they walked down the preserved walkways of the island. At another site, closer to the beach, pirates (in paper hats) had taken over the lawn, with a pirate chest and kids games.

Near the foot of the lighthouse, memorabilia for the island was on sale, as well as a crowd pleasing grilling tent serving hot dogs, chips, and drinks. When put together, the extras thrown into the preservation-themed event made the Discover the Island event a perfect reason to visit Egmont Key. 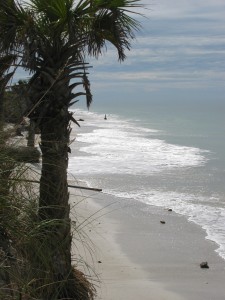 If Egmont Key sounds like a destination you would like to visit, you are right! The island enjoys the white sand beaches cherished on the Florida Gulf Coast, including the sparkling Gulf of Mexico waters. A ferry departs from Fort Desoto Park on a regular basis. Be sure to check the schedule ahead of time. Egmont Key Park is open year round for visitors. For the price of a ferry ride, you can tour its spectacular light house, fascinating ruins, and remarkable beaches. The brick roads of Fort Dade are yours to explore. For those who keep their eyes peeled, the local wildlife might make an appearance as well.

If you are planning a visit to the Central Gulf Coast of Florida, be sure to put Egmont Key on your list of unique sites to see.