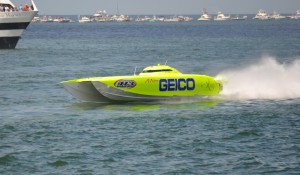 Super Boat Races at Clearwater Beach created a fun weekend for large numbers of spectators on September 28, 2014. Crowds lined the beach from Clearwater Pass northward, the sands of Clearwater Beach serving as the natural arena for the spectators. For those who wanted a closer look, Pier 60 offered access for either $5 or $20 depending on how far down the pier onlookers wanted to go. Speakers on the beach and on the pier informed attendees what was happening out on the water. One of the tidbits the announcers mentioned is that he Super Boat National Championship at Clearwater was chosen for this part of September because it was one of the slowest weekends of the year. Thanks to the boat races that is no longer true. According to some of the hotel staff we talked to the boat races bring in plenty of extra guests. Reports from last year estimated attendance at close to 180,000 with this year rumored to have attracted close to that number again. 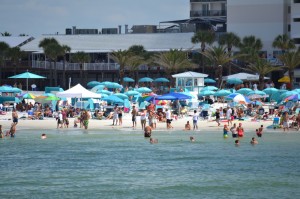 Clearwater Beach took on a very festive air, with many of the spectators watching the race from inflatables or while wading.  The most enviable race-side seats were on the flotilla of boats out on the water surrounding the racetrack. With the sun shining, the race went off well, with both visitors and locals touting the Clearwater Beach Super Boat National Championship as one of the more lively weekends of the year.

Secrets of the Fall at Clearwater Beach