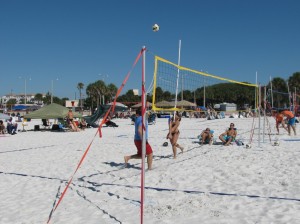 What could be better than playing volleyball on Clearwater Beach? Two organizations have recently visited the soft white sands of America’s favorite beach. The tournaments are held on the public beach, providing great entertainment for fans or casual beach-goers. While permanent nets exist at Clearwater Beach, like the one behind Frenchy’s Rockaway Grill, the organizations need a multitude of nets to accommodate the number of players.  Following the clubs is fun, and a very good excuse to come to the beach. 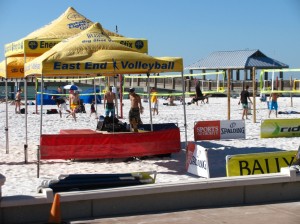 The recent Spalding Volley America Nationals tournament held by East End Volleyball at Clearwater Beach was a large event. The nets set up by event organizers stretched a fair span down the sand to the south of Pier 60. The matches went on October 26-27, giving dedicated spectators and beach visitors plenty to see. Beach Walk and Pier 60 provided excellent views of the action. The East End Volleyball web site places the entrance of the association into the public domain in the 1980’s. From the looks of the activity at Clearwater Beach recently, they are still going strong.

SSOVA came to Clearwater Beach again the first weekend of November. The weather was very kind, giving the players plenty of sunshine combined with mild temperatures. Open to the public, SSOVA allowed couples to sign up and play impromptu at the event. The competition was open to both young and old, the kids putting on some surprising displays of talent. According to their web site, the Sunshine State Outdoor Volleyball Association is run by the players for the players. While they do accept sponsors, the site states that funding for the group comes largely from its members. Why else do we like SSOVA? Because they love Clearwater Beach too! Their tournaments are held south of Pier 60, on America’s favorite beach. 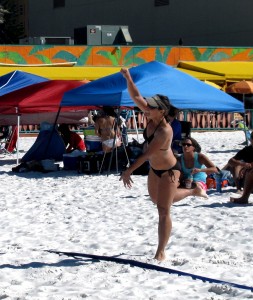 Remember, you can find volleyball nets on Clearwater Beach anytime. Just take a volleyball, something to drink, and your friends and you are ready to play.

Fishing the Gulf of Mexico