Clearwater Beach provides great fun for families. Just a couple of years ago, it won an award for being the Best Family Beach in America. Kids of all ages can enjoy the beach and its many activities. When it comes to kids on Clearwater Beach, another category of fun exists and that is recreational transportation. Kids love driving different kinds of vehicles and Clearwater Beach has some good ones. 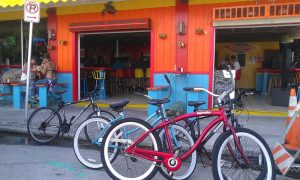 Bicycles are the most readily available type of transportation on the island. You will find numerous bicycle rentals up and down the main strip. With them you will find something called a Surrey. It is a four-wheeled cycle with pedals for locomotion. It seats four adults with a trundle seat for kids up front, making it a six person bike. Surreys are an entertaining way to get the whole family involved in cycling around the beach while still being together. The fun rides don’t end there, however.

Scooters and street legal go-carts are also available. The two wheeled scooters are the traditional types you would expect. The tiny cars are something else entirely. They have three wheels and are called scoot coupes. They are gaining popularity in resort areas where speeds don’t exceed certain rates. The small vehicles fit two, making them great for a parent and child or two teenagers. They are street legal, so driver’s licenses are required. 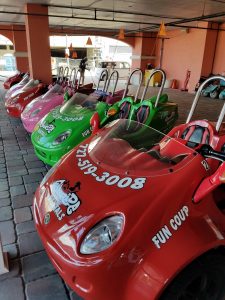 You have to follow the rules, of course. Motorized vehicles go on the street while it’s best to keep the bikes off the road. Yes, bikes are legal on the road, but the beach roads can be narrow and our bike paths are a pleasure to ride. Using good judgement is key. For the most part, people ride bicycles along Beach Walk, the beachfront boardwalk, or on the bike and walking path that goes along the causeway. Both routes have gorgeous views of the water that will give you that treasured feeling of being on vacation.

As far as we know, skateboards and rollerblades are allowed. Certain sidewalks are off limits because of the number of storefronts in close proximity but it is possible to go up and down the island without interruption on other sidewalks . You don’t see a lot of skating here at Clearwater Beach, probably because no one is packing items like that in suitcases.

Getting around Clearwater Beach is sometimes easier when you are not in a traditional car. That means grabbing a ride on one of the alternative methods of transportation might work out well for you. Keep in mind, most of the zones that tourists and day-visitors use extend less than two miles, so you can even just go on foot the whole time you are here. Regardless of how you choose to get around, you’ll be able to get to all the fun and entertaining things Clearwater Beach has to offer.