Boat Tours of the Anclote River 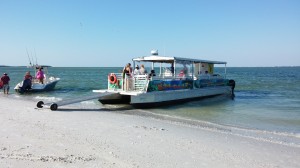 The river and island boat tour begins with a visit to the ticket booth on locally-famous Dodecanese Blvd, home of the Tarpon Springs Sponge Docks. Lined with fun gift shops, fantastic Greek restaurants, and ridiculously stocked desert shops, Dodecanese Blvd is a perfect place to gather people together for boat tours. The city of Tarpon Springs was founded along the Anclote River, where sponge divers docked their boats. The sponge trade is still alive and thriving today, with a multitude of sponge diving boats docked at the edge of the river. Thanks to the active tourism at the Sponge Docks, a number of cruise companies have made the docks their home as well. The cruises have various themes, some explaining the sponge industry in detail, others putting emphasis on dolphin sightings, sunsets, and local wildlife. Thanks to the gentle currents of the Anclote River, all of the tours are guaranteed to be relaxing. And for scenery, an Anclote River tour cannot be beat.

The Anclote River begins far inland, winding through mangrove forests and low lying terrain where no homes are built. The river is fed by run off and by a multitude of springs, creating a constant flow toward the Gulf of Mexico. Rain and spring waters are not the only forces to affect the river, however. The Gulf of Mexico plays it part twice a day as tides rise and fall. According to local boat captains, the tides of the Gulf of Mexico can push up river as much as four miles, which is about a mile beyond the docks themselves. For those who know what to look for, the leading edge of the tide can be spotted as a small wave moving upstream. 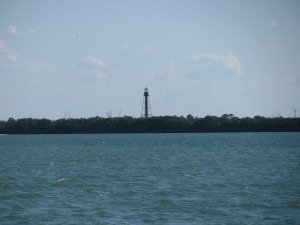 The width of the Anclote River between the Sponge Docks and the Gulf of Mexico ranges from less than 200 feet to over 1000 feet, making it fairly easy to navigate –or so says a passenger. Boats ply the river constantly, from small speed boats to large fishing and shrimping vessels. The tour boats are among the traffic that use the river, making their way from the docks westward, out to the Gulf of Mexico.

Heading out to the Gulf of Mexico 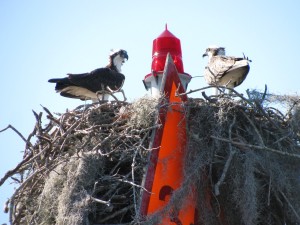 We were invited to ride on the Odyssey Cruises tour boat via local connections, which is to say, a couple of us from the Florida Beach Rentals office live in Tarpon Springs. Odyssey has a large pontoon boat which is perfect for carrying tour groups down the river. They offer multiple themes for their tours, including dolphin sighting, sunset cruises, and trips to Anclote Key, which is an island just off the coast. We pushed off the docks just after noon with the fascinating island of Anclote Key as our destination. The ride down the river was as entertaining as ever, with our tour guide pointing out wildlife and local features of the landscape.

Florida is home to some remarkable birds, most of the notable ones being large wading birds, though Ospreys, or fish hawks, are an exception to that rule. The ride down the river was roughly three miles, winding past commercial docks, restaurants, private homes, mangrove islands, and waterfront city parks. At the end of the river, the banks curved away and the mangroves dwindled to reveal the open waters of the Gulf of Mexico. Our destination was in plain view three miles out, the island of Anclote Key. 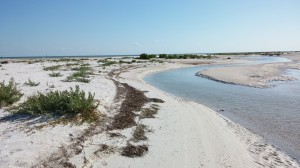 We landed on the southern tip of Anclote Key, beaching on the region of shifting sands and sandbars. Tidal rivers ran across the island while the soft white sands the region is famous for covered the shores.  Despite being a land form in transition, plants had found purchase on the newly formed spit of land shooting off the southern end of Anclote Key. We offloaded onto the sands, with several other island-hopping beach-goers already there to greet us. Odyssey Boat Tours gave us a time limit to play on the island and set us free. The passengers scattered, each choosing his or her own direction.  Anclote Key is a three miles long, far too much terrain for us to explore fully, so a search of the immediate area was the next best thing. Shelling on shifting sands of a sandbar was ideal. The tidal rivulets running across the sand made it even better. The shells were easy pickings. The springtime waters were a sparkling turquoise color, and the sand, as always, was as soft as talcum powder. Although we were given ample time to explore, it seemed too soon when the boat horn blew, rounding us up again.

Return to the Sponge Docks

Our return trip included a search for dolphins, though we had no luck on that day. It did, however, give us some appreciated extra time on the water. We arrived back at the Sponge Docks happy travelers. The overall tour was quite enjoyable. The boat ride put a number of us in the mood for the excellent deserts available just across the street, although I think some of us might have had that in mind all along. The tour seems a great idea for adding a pair of entertaining hours to the day. With an affordable price tag for this boat tour of the Anclote River, the Gulf of Mexico, and Anclote Key, it is an easy choice for a bonus activity during a vacation outing to Tarpon Springs Sponge Docks.

It Is All Greek to Florida

4 Comments on "Discovery Tour of Anclote River and Anclote Key"

Sounds like an awesome tour. What hours does the boat run?

This looks like a great tour to take out-of-town visitors on.

The boat runs at regular intervals but we don’t have their schedule. The number is provided on the blog so that you can inquire directly. It’s a nice ride, so do check it out if you can.

Wow, it looks amazing out there. Would love to visit there sometime.