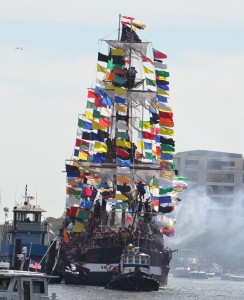 The City of Tampa fell to invasion once again this year as pirates sailed into Tampa Bay. The pirate ship named the Jose Gasparilla sailed up the bay to the convention center where the pirates accepted the key to the city from the mayor. The ship was filled to the brim with pirates, every crow’s nest and deck filled with attacking buccaneers. With cannons thundering, the ship made its way from Port Tampa Bay up Seddon Channel, which ends in front of Tampa’s convention center. An armada of private boats and cruise boats surrounded it, filling the channel from side to side and end to end. The arrival of the ship was greeted by the screams of the capacity crowd along the waterfront.

Pirate Party of the Year 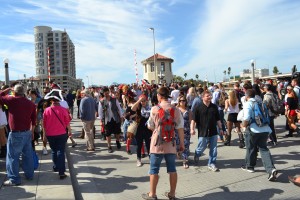 The Gasparilla Pirate Invasion first occurred on horseback, all the way back in 1904. The ship, Jose Gasparilla was added later, apparently being the world’s only fully-rigged modern day pirate ship. The festival is now over a hundred years old and as popular as ever. The streets swarmed with attendees, a large portion wearing pirate gear. Vendors were out in force, booths and carts providing plenty of food and souvenirs. Downtown Tampa parking lots switched from hourly charges to a onetime fee for the day to accommodate the event that filled Tampa to to the brim. The festivities officially began at 11:30 but would-be pirates began to appear in the streets as early as 8:30 in the morning. By the end of the Invasion, the streets were filled from side to side with Gasparilla revelers. 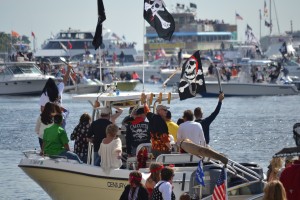 One of the best parts of the Gasparilla Pirate Invasion each year is the armada of private and charter boats that accompany the arrival of the tall ship Jose Gasparilla. Charters from our own Clearwater Beach were among the flotilla, our camera capturing Starlite Majesty, The Tropics, Two Georges, Super Queen, and Calypso Queen. The boats arrived to the waters surrounding the convention center non-stop, most of them decorated with beads and other pirate gear. One boater had his own cannon. While the gun was only a foot long, it had all the explosive sound of a large cannon. Private boats cruised the shoreline throwing beads to the waiting crowds along the railings of the convention center. The result was a dizzying array of moving boats, loud music, cannon fire, and shouting crowds. 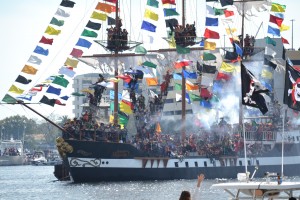 The Tampa waterfront is a pleasant place to be any day of the year. The area has seen many improvements over the decades. Waterfront dining is the most popular attraction, second only to strolling the waterfront walkways. It is the site of a popular Fourth of July celebration, as well as many other events throughout the year. Amalie Arena and Curtis Hixon Hall are two sports and concert venues at the water’s edge for Tampa fun seekers. And, of course, the waterways of Tampa are a paradise for private boat owners to enjoy, a surprising number of restaurants catering to those arriving by boat. Adding the Gasparilla Pirate Invasion to the Tampa Waterfront is a great idea for the city. The city bursts at the seams for the Gasparilla themed events that include the Gasparilla Kids Parade, the Gasparilla Pirate Invasion, the regular Gasparilla Parade, and the nighttime pirate festival. If you are planning a trip to the Tampa Bay area, which includes Clearwater and Saint Petersburg, keep the end of January in mind for the dynamic Gasparilla Pirate Festival events.