A Day at Clearwater Marine Aquarium 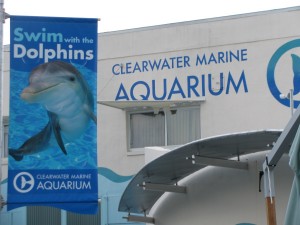 The Clearwater Marine Aquarium has grown into a beach vacation activity that can last a family the better part of a day. Thanks to the Dolphin Tale movies with stars Winter and Hope, interest in the aquarium has risen dramatically, and the things to do and see at the facility have expanded. Going to the Clearwater Marine Aquarium is no longer confined to just the main building. You can now take a ferry ride across the harbor, a marine excursion onto the bay, and see an expanded exhibit detailing the filming of the Dolphin Tale movie. All of that is in addition to seeing the dolphin movie stars Winter and Hope, along with the other rescued sea life at the Clearwater Marine Aquarium.

A great way to see all the sights at the Clearwater Marine Aquarium is to start at the Harborview Center. The Harborview Center is located off the beach in downtown Clearwater, at the corner of Cleveland Street and Osceola Street. Inside you will find displays showing you and your kids about the making of the Dolphin Tale movie. While you walk through the center, you will pass various TVs running scenes from the film. Some of the scenes were actually shot at the Harborview Center, allowing you to compare the physical settings in front of you to the movie scenes. Plenty of fun facts about Winter and the movie are posted for visitors to read.  In the Dolphin Tale film, a hurricane impacts the Clearwater area. You can experience a simulated hurricane in an exhibit which puts you at a mock up of a city street with hurricane winds blowing. A hands-on sea life tank allows the kids (and kids at heart) to touch a variety of sea animals. When your viewing is done, you can grab a souvenir at the gift shop to take home some Winter the dolphin memorabilia.

Whether you start at the Clearwater Marine Aquarium or the Harborview Center, getting from one building to the other is not only easy, it’s fun! You can choose between the Jolly Trolley or the Clearwater Marine Aquarium ferry. The Jolly Trolley is an open air trolley that services Clearwater Beach and the coastline northward to Tarpon Springs. You will be treated to a ride over the scenic causeway bridge, which is included in the price of your admission. Also included in your admission is the alternate water crossing on the ferry. Enjoy a ride under the bridge instead, giving you close up views of Clearwater Harbor. 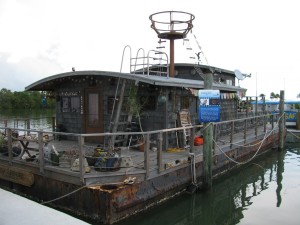 The highlight of the tour for fans of Winter the dolphin is a trip to see the celebrity dolphin at the Clearwater Marine Aquarium. The aquarium is located halfway across the causeway to Clearwater Beach, in the Island Estates community. Once you arrive at the aquarium, you can view the houseboat used in the filming of Dolphin Tale, which is docked near the entrance. On your way in, be sure to get a green screen photo of your family that you can purchase later with fun sea life edited in around you. The well-stocked gift shop greets you as you walk through the doors, with lots of cool stuff for the kids and the adults. Near the entrance is a small movie theater and a sting ray tank where you can touch the rays. 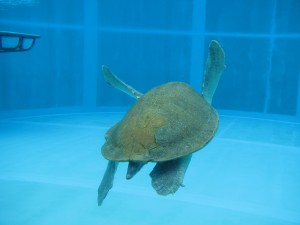 On the same level you will find a pirate themed hallway, a life sized diorama of area sea life, and a large tank with fish and a shark. You can also find a kids’ room with drawing books, a TV, smaller aquarium tanks, and full skeletons of otters, dolphins, and a species of a rare, small whale. Nearby is a tank housing rescued sea turtles, giving visitors fantastic underwater views. After you explore the ground floor, it is time to head upstairs to see the famous dolphins. 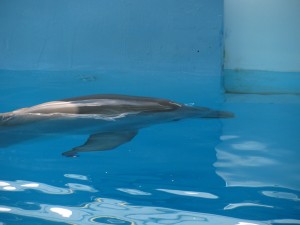 Viewing Winter the dolphin from Dolphin Tale I, and her new co-star, Hope, from Dolphin Tale II, is very easy. Their tanks are in the open, allowing for plenty of opportunities to view them. During our visit to the aquarium, Winter and Hope where in separate tanks. The two solved the problem by whistling to one another over the wall between them. A larger tank joins to the private ones, allowing Winter and Hope to interact. While we were there, some of the kids lined up for a chance to stand on a platform in front of Hope’s tank to personally meet her. 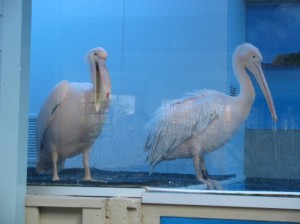 Nearby you can find a pair of white pelicans which were used in the filming of Dolphin Tale I and II. Other tanks on the same level contain rescued sea turtles and sea otters. Be sure to grab a schedule at the door or check online to find out when the aquarium staff and volunteers will be giving educational talks. You can learn about the lives of these animals in the wild and about the risks they fell victim to that led them to the Clearwater Marine Aquarium. Another fun attraction is on the top deck of the aquarium. There you will find Nicholas, a dolphin rescued from a stranding along with his mother. Although his mother did not survive, Nicholas has done very well. He is now well known for his antics, such as doing spontaneous flips or splashing the audience. He is young and playful, earning him a reputation as the most energetic dolphin at the Clearwater Marine Aquarium. 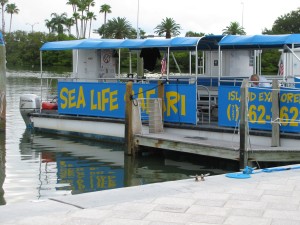 One of the best parts of the adventure at the Clearwater Marine Aquarium is the Sealife Safari boat tour. Aquarium staff take you on a ride across Clearwater Harbor with some special extras in store. The boat trails a net across the seafloor, pulling up local sea life that are then displayed in tanks throughout the rest of that day before being released. Kids and adults can view native sea life up close, such as sea horses, sea urchins, pin fish, flounder, and more. It is fun to note that when catfish are caught, they are thrown back, because the dolphins of the harbor like to eat them. You stand an excellent chance of seeing local dolphins while out on the bay waters. The boat stops at a popular boating destination called Shell Island. The island is aptly named. It is a shell pile create when the boating channel was dredged in earlier decades. Nowadays boaters can stop off at the island, collecting shells to their hearts’ desire. The Sealife Safari boat allows you to disembark on the tiny island for a short stay before heading back across the water of the harbor. The boat ride offers fantastic views of the turquoise waters of the bay, the shoreline of the City of Clearwater, the beach causeway and bridge, and the barrier island of Sand Key. Sealife Safari is a hit with kids and it is a great way for adults to experience Clearwater Harbor. 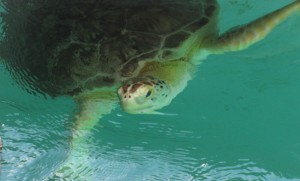 The Clearwater Marine Aquarium is a perfect family outing while staying at Clearwater Beach. Aside from the attractions already at the famous Gulf Coast beach, you can spend the better part of the day touring this now-famous facility. It is a favorite for kids who loved the Dolphin Tale movies and has actually spawned an increase in tourism to the area, being named Florida’s number one attraction by a 2013 USA Today readers’ poll. If your vacation destination this year is Clearwater Beach, be sure to put the Clearwater Marine Aquarium on your list.