What is a Gaper Jam? A Gaper Jam occurs after a vehicle accident happens on a busy road. Even when the authorities have arrived to handle the cleanup, passing motorist will slow down to stare at the wreckage. The word is surely created by the people one hundred cars back who are failing to get to work on time. 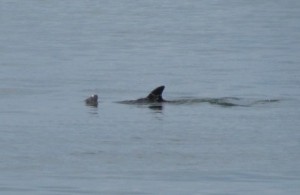 Only along the Florida Gulf Coast will you find this other kind of gaper jam. This morning on the way into the Florida Beach Rental office, I was caught in a miniature gaper jam along the scenic Dunedin coastal road. This tiny traffic snarl was not created by a collision, but rather by a pod of dolphins swimming within twenty feet of the shoreline. Their presence was noted by the drivers because it was a windless morning, giving the waters of Saint Joseph Sound a smooth, glassy surface; ideal for dolphin sighting.

The pod was not only breaking the surface with their many dorsal fins but was also creating a very noticeable disturbance as their bodies displaced a surprising amount of water. The displacement pushed the water upward and out to the sides, giving the appearance of mound of water moving northward through the harbor. The pod was keeping close together and I counted at least three fins, though the moving water suggested even more beneath the surface.

While the Florida Gulf Coast has multiple dolphin sighting boat tours, seeing them at unexpected times is always a treat. The coastal waters of the Gulf of Mexico are a favorite playgrounds for bottle nose dolphins. If you are planning a Central Gulf Coast vacation, be sure to bring your camera. While you are strolling along coastal waterways, keep a look out for dolphin fins. They make appearances much more often than you might think.