After years of watching the Little Toot dolphin tour set out onto Clearwater Harbor, I finally decided it was time to get on board. While I’ve done dolphin sighting cruises at Clearwater Beach before, I’ve never done one on the unique vessel called the Little Toot. In fact, the best dolphin pictures in my collection are from a ride where we ran parallel to that boat with the dolphins jumping in its wake. 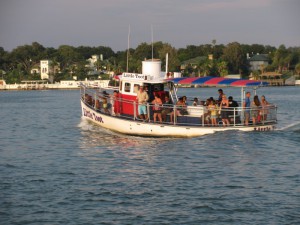 The dolphins in Clearwater Harbor are bottlenose dolphins, made popular in numerous TV shows and movies. Most recently, Clearwater area dolphins appeared in the movies Dolphin Tale and Dolphin Tale II, with the celebrity dolphins Winter and Hope.

Living in the Clearwater, Florida area gives locals ample opportunities to see dolphins. They appear quite often along the boat docks, in the harbor, and out in the Gulf of Mexico. Boaters in the area are treated to sightings regularly. In fact, if you are here long enough, you will eventually see them from your car as you drive near the waterways. While we are accustomed to the sightings, we all agree that each sighting is still a special event. For visitors to the area, dolphin sightings take on somewhat magical air. That’s why the dolphin sighting tours on Clearwater Harbor and out on the Gulf of Mexico are so popular. You will often see the tour boats cruising the harbor or past the beach. 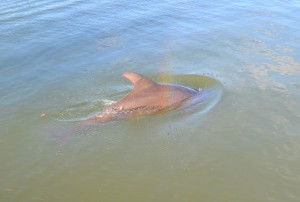 Each tour boat has its own perks. Some are conducted on giant speed boats, others on comfortable pontoon boats with lots of seating. The Little Toot is a vessel that looks like a tug boat. Because of its design, it creates a tall rolling wake when it picks up speed. That’s a good thing when you are searching for dolphins. A wake is a very alluring thing for bottlenose dolphins. They love to play and jump in the waves, and the Little Toot makes the best ones.

Our tour took us around Clearwater Harbor. We skipped going out onto the Gulf of Mexico because it was a windy day the water was too choppy for sighting dolphin fins. It took a bit of time but we did get a few sightings of fins breaking the water. Finally, however, we found some dolphins who wanted to play. When we passed them by, they followed us and caught up to our wake. The following video shows them jumping from the water using the large waves created by the Little Toot.

Most every dolphin sighting tour in the area offers a dolphin sighting guarantee. If you don’t get to see any dolphins, you get your next ride for free. The great part of the tour is that, even without dolphins, the ride is scenic and well worth the time. The other good thing is that you are almost always going to see dolphins. If you get the chance to visit the area, make sure to put one of these dolphin tours on your list of things to do.