Does the Gulf Coast Have Sunken Ships?

Of course the Gulf Coast has sunken ships! You will find that any harbor locations around the world have long histories of sunken ships. Before European ships arrived, Native Americans plied the waters in smaller craft. The coasts of the Central Gulf Coast of Florida have been in use by large ships since the Americas were first settled. Settlers, war ships and even pirates used the shores of Florida, especially Tampa Bay, where Fort De Soto State Park still displays cannons used to defend the mouth of the bay. The maritime history of the Florida Gulf Coast is fascinating, and worth looking into.

A number of websites help divers and others locate known shipwrecks along Florida’s coast. If you are a diver, these are great resources. However, if you are the average tourist, it is not likely you will be diving on shipwrecks. So how can you see your own sunken ship? 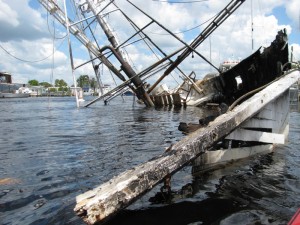 This local secret turns out to be in Tarpon Springs. Tarpons Springs is a fun, Greek-style tourist destination with enough shops, boat tours, and dining to keep any visitor happy. Located on the Anclote River, Tarpon Springs is known for its Sponge Docks, where the catch of the day is sponges. Little known to most of those walking the docks is that Tarpon Springs has its own sunken ship that you can see. Protruding from the waters of the Anclote River, you can catch a glimpse of part of this ship, identified by the pitch of its mast and derricks. Look for it midway down the docks. If you are lucky enough to take a boat tour past this ship wreck, the guide will surely tell you all about it, and you will get a close up view of this modern sunken ship.

The Best Beaches in America