What is an Osprey? 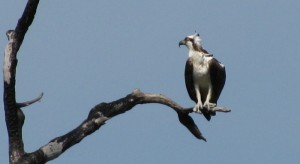 An Osprey is a predatory bird that hunts only fish. It has black and white feathers, the male and female differing only slightly. They are large hawks, most being larger than an average chicken. They range across the U.S. and beyond, wherever good fishing opportunities can be found. Osprey fish by diving down and grabbing fish that swim near the surface by using their very fish-hook like talons. They are a lot of fun to watch and are a favorite for expert and beginning bird watchers, as well as photographers.

Where Can I See Ospreys on the Florida Gulf Coast? 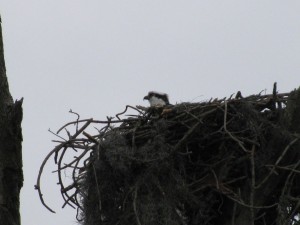 A better question might be, where can’t you? Osprey are not rare and visitors to Florida’s Gulf Coast can see them easily, flying through the sky or perched high in the tree tops. Any open bay or lake might attract one of these raptors so keep an eye out for them. Also known as a Fish Hawk, they often nest in the tops of dead trees, but visitors might notice large dishes or pans set on top of telephone poles. Those are for Osprey nests, which are quite large. The utility company offers these birds nesting places in lieu of the Ospreys choosing their own in less desirable locations. Along the Florida Gulf Coast, most very large nests in trees, on utility poles, or on billboards belong to Ospreys. 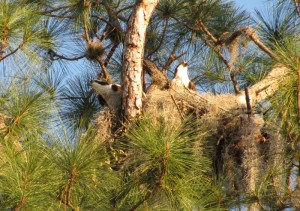 While you can see nesting Osprey almost anywhere, the locals know the best place to get excellent views of Ospreys building nests and rearing their chicks. This local secret is the very well-known Honeymoon Island. Aside from the great beach, Honeymoon Island has a fairly long hiking trail that loops. On the Eastern trail you will see large numbers of Osprey nests in the tall, dead, bark-free trees. A pair of Ospreys should be working each nest.

When to See Nesting Ospreys 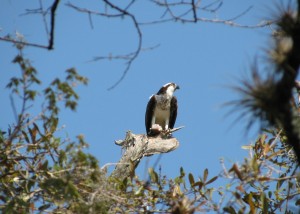 The Osprey arrive to nest on Honeymoon Island some time in or near February. If you are visiting in late January through March, go to the Honeymoon Island nature trail to view these fantastic birds. If you like taking photos, they will give you great shots as they fly in with nesting materials early in the season, or fish for their chicks later on.

The Best Beaches in America Are Here